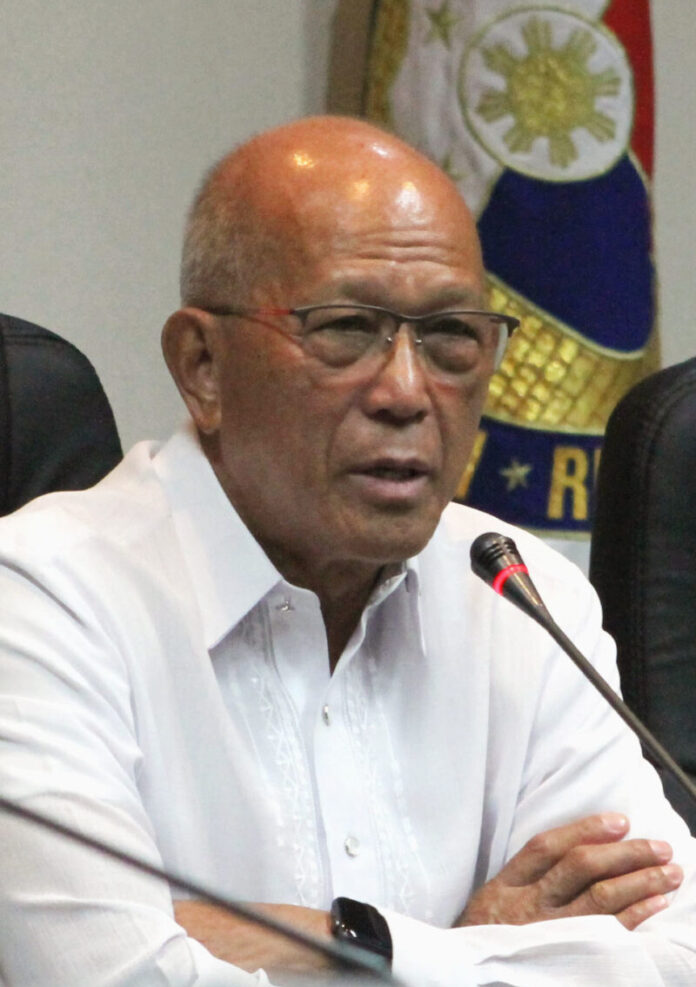 Defense Secretary Delfin Lorenzana, who was once tagged by no less than President Rodrigo “Digong” Duterte as a CIA (US Central Intelligence Agency) man, demonstrated his pro-US bias when he quickly disagreed with Chinese Ambassador Huang Xilian’s view that the “overtures” (a very apt term) of US defense officials who recently visited the country as “sowing chaos”.

Without going into the merits, or lack of them, of Huang’s views, I believe it was not the call of Lorenzana to react to them.  That should have been the call of the Americans.  After all, they were the ones who made the overtures!  Why speak for them?

Lately, we have been hearing from the US its oft-repeated assurance that it has our backs covered.  Against whom?  The Chinese?

What exactly have the Chinese been doing aside from seizing and reclaiming reefs and shoals that belong to us and turning them into military garrisons in the South China Sea and the West Philippine Sea (SCS/WPS)?  Oh yes, they are now regularly intruding into our territorial waters and exclusive economic zone ever since, speaking of which, how about the US putting its money where its mouth is by helping us patrol the areas mentioned?

The US did not cover our backs when China did the seizing and reclaiming of reefs and shoals that belong to us.  The US knew what the Chinese were up to – to put a stop to the total domination of the SCS/WPS by the US whose Seventh Fleet has forever been plying the area.

But when we protested against the Chinese move and sought the help of the US, we were simply told that it was “neutral” when it comes to territorial disputes.  It is obvious it has now ditched that position to suit its own national interest.  Or has it?

Instead of helping us, the US bamboozled the Noynoy Aquino administration into filing a protest against China’s move before the Permanent Court of Arbitration (PCA) and urged the hiring of American lawyers at the reported cost of P700 million.

As everyone knows, the PCA rendered a ruling favorable to us without China agreeing to and participating in the arbitration proceeding, a condition sine qua non for any arbitration case, thus rendering the PCA’s ruling questionable in its validity in international law.

Be that as it may, the US and some of its Western allies, including Japan, now merrily express their unqualified support for the PCA ruling.  Nonetheless, that does not set the ruling, in my view, aright.  That is why it has not found support among the huge majority of the UN members.  In fact, it has not even found support among all the members of ASEAN!

The newly-found generosity of the US in donating arms and other military hardware to us, although belatedly, is very much welcome and appreciated.  They will certainly help us in combatting terrorism and the local insurgents.

However, the government surely must realize that no amount of such donations from the US will ever be sufficient to make us battle-ready to face a Chinese military onslaught, albeit remotely possible.

Fortunately, I do not foresee such an eventuality taking place… unless our leaders continue to keep a blind eye to the dangers of the presence of US troops and military bases on our soil.

We remain friends to the US, just as we are now friends to China.  But we cannot remain friends to both if we favor one over the other.  “Para tayong namamangka sa dalawang ilog.  Hindi tama ‘yun.”  (We are like paddling our canoe on two rivers.  That’s not right.)  It could only lead to disastrous results for us.

China and Russia are protagonists in the economic, political and military fields and will remain so in the foreseeable future.

Heaven forbid, but such a relationship could conceivably, even probably, result to an armed confrontation between the two.

As President Rodrigo “Digong” Duterte himself said, and even Lorenzana, a military clash between the two will most certainly draw Chinese attack on the Philippines where US troops and military bases are located.

I, therefore, fervently pray that Digong will ultimately find his way into avoiding such a grim scenario by keeping his promise to get rid of foreign troops and military bases on our soil.  It will be his greatest legacy to the Filipino people.

RADIOACTIVITY IN THE WEST PHILIPPINE SEA

The director of the Philippine Nuclear Research Institute (PNRI), Carlo Arcilla (no relation to this writer), said that a study on corals conducted by the Institute’s researchers have found “elevated radiation levels in the West Philippine Sea (WPS), higher than in other coastal areas of the country”.

The radioactivity was supposedly detected through the isolation of Iodine 129 in sea corals.

According to Arcilla, Iodine 129 is a product of nuclear fission, given off by nuclear reactors or nuclear power plants.

One does not have to be a nuclear scientist to conclude that since there are no nuclear reactor or power plant anywhere near the WPS, the radioactivity could only have been caused by nuclear-powered war vessels of the US that have been regularly plying the area and calling on our ports over the years.

Given this discovery, the government should now strictly implement measures to prohibit such vessels from entering our territorial waters and exclusive economic zone over which we have sovereign rights in the WPS as mandated by the Constitution.

As long as the authorities concerned continue to ignore the items below, so long will they remain in this space.

1)  IS THE US COMING BACK TO SUBIC? – About three months ago, this newspaper reported that Maritime Industry Authority (Marina) Administrator Robert Empedrad, former Philippine Navy Chief, said that a contract has already been finalized between Australian shipbuilder Austal and US private equity firm Cerberus Capital Management and will reportedly soon take over the Subic Bay yard from Hanjin Shipping, a South Korean firm that went bankrupt in 2016.

So what will Digong do, or can do, if the contract is already a fait accompli?  A reliable source said that Austal and Cerberus are reportedly poised to take over the facility as early as next month.

2)    THE NOTORIOUS SMARTMATIC – In June last year, Digong directed the Department of Information and Communications Technology (DICT) and the Commission on Elections (Comelec) to search for a replacement for poll technology provider Smartmatic.

In his column of 6 December 2020, an esteemed fellow columnist in this paper, Mr. Marlen V. Ronquillo, has the following to say about the extreme importance of having a clean 2022 election:

In this regard, a reader wrote:

“Bautista is untouchable.  He knows too much on both sides of the fence.  Bautista acted brazenly because his bases were fully covered.  No action for extradition?  Of course, there will be no extradition because there are no initiatives.  Philippines does not care and US has its own interest.  Why did Bautista go to the US?  Because he is properly protected there.”

About two weeks ago, Foreign Secretary Teodoro “Tweeterboy” Locsin, Jr. described Vice President (under protest) Leni Robredo in a tweet as having “superabundantly more sense than her desperate followers who find everything wrong with everything that’s going right”.

A reader reacted thus:  “Once upon a time, he called her boba.”

I wonder how President Digong must feel about Locsin’s description of Robredo.