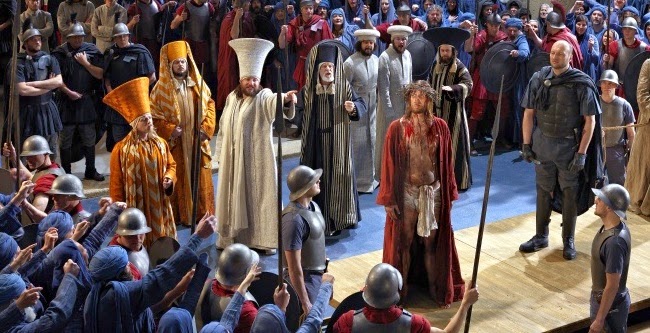 The Jews brought Jesus before Pilate with charges against Him. Pilate interrogated Jesus and concluded with this judgment: “I find this man not guilty” (Lk 23:4b). Still, the assembly of the Jews, at the instigation of the scribes and Pharisees, brought Jesus to Herod and then back to Pilate whom they forced to sentence Jesus to death.

Herod and Pilate did not find Jesus guilty of any crime. Their investigation proved that Jesus did not do anything that was worthy of a capital punishment. Jesus did not commit any civil crime or mortal sin yet His death on the cross was both a capital punishment for a civil crime and a condemnation for His presumed blasphemy. Jesus was innocent yet He was condemned a criminal.

We begin the Holy Week with Palm Sunday in which we commemorate the triumphant entrance of Jesus to the city of Jerusalem. People welcomed Him as a Savior. But some days later, they condemned Him to death and chose rather the criminal Barabbas to be set free. Thus, we also commemorate this Sunday the condemnation of Jesus to death by the Jewish mob, His sufferings and crucifixion. All these Jesus suffered for the sake of our salvation.

Jesus was not found guilty because the guilty ones were the Jewish community and the Roman soldiers who condemned Him and all of us humanity who continue to reject and condemn Him through our sinfulness. We should be the ones to suffer on the cross yet Jesus took away our iniquities and saved us from eternal damnation.

This Holy Week, we do not simply commemorate such memorable event but also relieve it, joining Jesus Christ in His suffering and death on the cross. This we do because Jesus Christ said that if we do not join with Him in His death on the cross, we cannot also join with Him in His resurrection. Without resurrection to new life, death will be a condemnation to eternal damnation.

As we celebrate this Holy Week, let us remember that it is a week that must make us holy by not engaging in party or in other activities devoid of the Lenten spirit of sacrifice, penance and repentance. We are exhorted to make this week holy by joining Christ on the cross through our moments of prayer, acts of sacrifices and charitable activities. We are called to repent and renew our commitment to Christian faith and discipleship by meditating on the sufferings of Jesus and living out His teachings. Through the sufferings and death of Jesus on the cross, He acquired new life in His resurrection. Through the intercession of the sorrowful mother, the Blessed Virgin Mary, and through our union with the sufferings of Jesus, may we also resurrect with Jesus into a new life of grace in order for us to live worthily our dignity as children of God.

Jesus: A Cause Of Division

I Shall Not Leave You Orphans