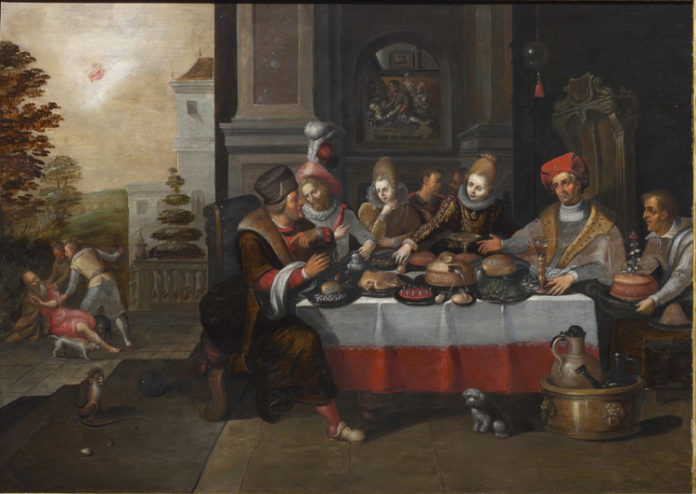 The rich man in the gospel’s parable is not named while the poor man is named Lazarus. This is opposite to what we can usually read in the newspapers or magazines or hear in the radio or see in the television. In our modern media, usually the rich people are mentioned in special event but the simple people like the servers, waiters, drivers, etc. are not mentioned. Jesus made it clear that the poor man was not dishonored simply because he was poor; rather he was honored and given dignity by giving him a name simply because he was a man. Everybody, whether rich or poor, white or black, Muslim or Christian, educated or uneducated, is important because of his human dignity. All sharing in this dignity as created of God in His own image and likeness must be treated equally.

The rich man, on the other hand, was not condemned because of what he did to Lazarus. In fact, he did not do anything bad to him. He recognized his presence in his vicinity and he even let him eat the scraps the fell from his table. The sin of the rich man was not the sin of commission but rather the sin of omission. He did not do anything good to Lazarus. He did not help him. He simply accepted the presence and miserable condition of Lazarus as a part of the natural landscape. He ignored Lazarus and his needs. He was comfortable with his extravagant life in the midst of the sufferings and poverty of his neighbor.

The attitude of the rich man towards Lazarus was just like the attitude of Cain to Abel when God asked him where his brother Abel was and he answered back: “Am I my brother’s keeper?” He did not care about his brother Lazarus. On the other hand, Albert Schweitzer was a man for others. He was voted as “the man of the century” in the year 1950 for his multiple geniuses being an outstanding philosopher, a reputable theologian, a respected historian, a concert soloist, and a missionary doctor. Two years later he also was awarded the Nobel Peace Prize. At the age of 43, he left his promising career in Europe and went to Africa to serve the poor there for almost 50 years. His conversion was due to the gospel for today. He believed that he could not be happy living in abundance while the people around him were suffering in poverty and misery.

Today, there are a lot of Lazarus’s in our surroundings and in our community. These are the beggars and the simple people selling on the streets, the squatters in the neighborhood, the sick in the hospitals, the prisoners, the poor, the victims of injustice, etc. We may not be a rich person but certainly we cannot be like Cain to Abel; we can never be indifferent to these marginalized people. As Christians, we are brethren in the one Lord Jesus and in the one God who is our Father. We must take care of one another. We must imitate the example of Albert Schweitzer who sacrificed a lot in order to serve the needy.

THE BETRAYAL OF JESUS

God Gives His Only Son

God Is With Us