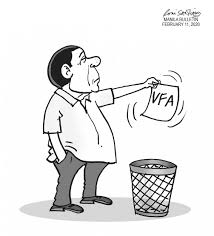 Those who voted for Senate resolution 337 asking the Supreme Court to rule on the constitutionality of President Rodrigo Roa Duterte aka Digong’s unilateral termination of the VFA at least showed some conviction on their part.  If they lose, no one can claim that they hedged their bet.

Those who abstained showed no conviction at all.  They hedged their bet.  Either way the Supreme Court decides, they can always claim they neither voted for nor against the resolution.

Although the resolution was asking the high tribunal to rule on the constitutionality of Digong’s action, the bottom line is that those who were for resolution 337 really are against the abrogation of the VFA.  They didn’t have to say that.  Everyone knows.  They want to be on the good side of the US.

On the other hand, the abstainers were presumably for the termination of the VFA but did not have the gumption to vote against the resolution.  And they are supposed to be allies of Digong!

So, why did they hedge their bet?  Is it because they do not want to be on the bad side of the US in case the Supreme Court rules in favor of the Senate resolution and the VFA abrogation is retracted?

Or is it because Digong is already on the verge of being a lame duck?  They should be more prudent.  The man, being the adroit strategist that he is, must have a couple more of aces up the rolled sleeves of his barong tagalog.

You decide, dear reader, bearing in mind that Digong still has more than 80 percent of the people supporting him.

There is one factor that those against the VFA termination ought to bear in mind – US President Donald Trump’s reaction to the termination.

To further illustrate, after talks with the Talibans, Trump has agreed to withdraw US troops from Afghanistan after 19 years.

Will Trump change his mind?  I doubt it, notwithstanding some of his underlings’  utterances, like his Defense Secretary Mark Esper, some high US military officials and his outgoing ambassador to the Philippines Kim Sung.

The Philippine Star news report simply said that the “Duterte administration lifted the ban on aid negotiations between the Philippines and countries that supported a UN Human Rights Council resolution that mandated an examination of the country’s human rights situation”.

Although Finance Secretary Carlos Dominguez III referred to it as a “presidential directive”, he did not attribute it directly to the President.

No matter.  But there goes that mendicant mentality again that I referred to in my last column!

To begin with, does anyone think that if the US decides to stop aid and grants to the Philippines on account of the VFA abrogation, that it will definitely stop there?

Personally, I would not discount the possibility that the US will try to influence other states to make it difficult for us to fill the financial gap to be left by it.

But even assuming that the US doesn’t resort to that, we should let those countries who voted for the Irish resolution in the Human Rights Council do it of their own volition.  Let them initiate the move.  It is enough that they now know we would no longer be averse to negotiating with them.

In fact, the gap that may be left by the US can easily be filled through our own resources.  The humongous and horrendous pork barrel of our honorable senators and congressmen alone should be more than enough to fill the gap, not to mention the resources lost through corruption in several government agencies which Digong appears unable to stop.

A VOTE OF THANKS FOR LACSON

Senator Panfilo Lacson said he received information that there are now 2,000 to 3,000 members of China’s Liberation Army (PLA) in the country on an “immersion mission”.

Although he said his “source is fairly reliable, based on past information that he has provided to me”, he stressed that the information is yet to be validated.

I have a hunch who Lacson’s source is.  But that’s not important.

True or not, I think we owe Lacson a vote of thanks for sharing the information he received.

And as he suggests, it behooves our intelligence community to exert extra effort to verify the information.

DIGONG AND MAYNILAD’S PANGILINAN TO MEET

What about Fernando Zobel de Ayala of Manila Water?  Will a meeting between him and Digong also take place soon?

Last week, I asked if the charges of syndicated estafa and economic plunder Digong promised to file against Ayala and Pangilinan are already in the works.  He said the evidence against the two is airtight.

What better opportunity is there to prove once and for all Digong’s promise that the law will be applied to all, rich or poor?  It will also be a big boost in his fight against corruption.

Let’s watch what happens after Digong and Pangilinan meet.

Senator Richard “Dick” Gordon, he with the American name and pseudo-American accent, asked why Malacanang seems “hurt” whenever China is involved in issues in the Philippines.

He was reacting to the request of Presidential Spokesman Salvador Panelo to share intelligence information with respect to allegations of Chinese nationals being involved in money laundering activities for proper investigation.

Panelo can speak for himself, but I see no “hurt” in his statement.  In fact, if Gordon is really after the protection of the national interest, he simply should be glad to grant Panelo’s request.

What if Panelo were to ask him in turn why he was so quick to react to the termination of the VFA.  Would he get hurt?…  Just asking.

NO ONE FIT TO BE PRESIDENT?

The good news is he has more than two years left before the end of his term.  The bad news is he sees no one among the present crop of politicians who fits the bill to be president of the country.

Many will agree with him.

Me?  I see one but I’d like to give him a little more time to see if he will hurdle the potential stage to the most qualified and acceptable stage.

1. “Forget what hurt you but never forget what it taught you.” – Shannon L. Alder

2. “Yesterday is not ours to recover, but tomorrow is ours to win or lose.” – Lyndon B. Johnson

3. “It is impossible to live without failing at something, unless you live so cautiously that you might as well not have lived at all, in which case you have failed by default.”  – J. K. Rowling