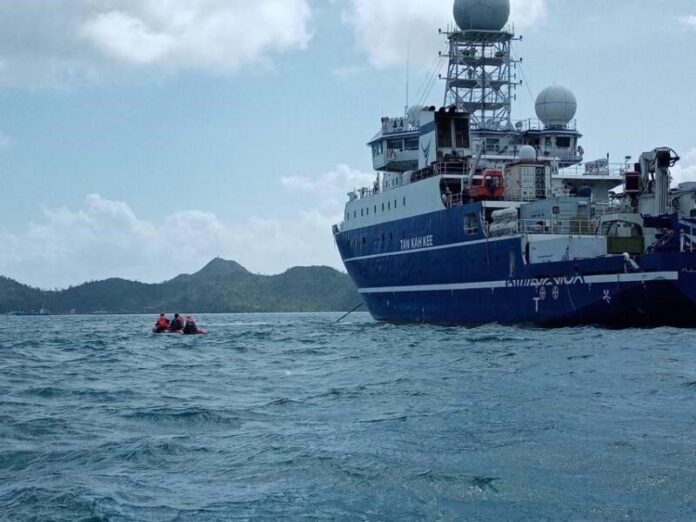 By Samuel Toledo and Connie Calipay

LEGAZPI CITY – The Naval Forces Southern Luzon (NAVFORSOL) has vehemently denied reports that Jiang Geng, a Chinese research ship that docked in Bato town in Catanduanes from Jan. 29 to Feb. 1, has conducted research activities off the island-province.

NAVFORSOL Commander Jose Ma. Ambrosio Ezpeleta on Tuesday said their sea and air assets and the vessels of the Philippine Coast Guard (PCG) in Bicol conducted a 24-hour patrol in the surroundings of the foreign ship while docked at the waters of Bato town.

“In fact, while inside Philippine territory off Catanduanes, we did not allow any passenger of the ship to disembark,” Ezpeleta told the Philippine News Agency.

Ezpeleta said the Chinese vessel merely requested to take shelter because bad weather was prevailing in that portion of the Pacific Ocean.

“We confirmed that the Jiang Geng failed to get permission from the Philippine government to enter our territory. But UNCLOS (United Nations Convention on the Law of the Sea) allows foreign vessels to enter another territory if it is in distress,” Ezpeleta said.

He said that due to short notice, the Department of Foreign Affairs failed to issue a permit to the foreign vessel to enter Philippine territory through a request from the Chinese Embassy.

Ezpeleta also confirmed the claim of the crew that they were forced to enter Catanduanes waters due to bad weather as Catanduanes is the nearest island where the Chinese vessel was passing in going back to China.

He said the vessel was escorted out of the territorial waters of the country by PCG ships on Monday. (PNA)