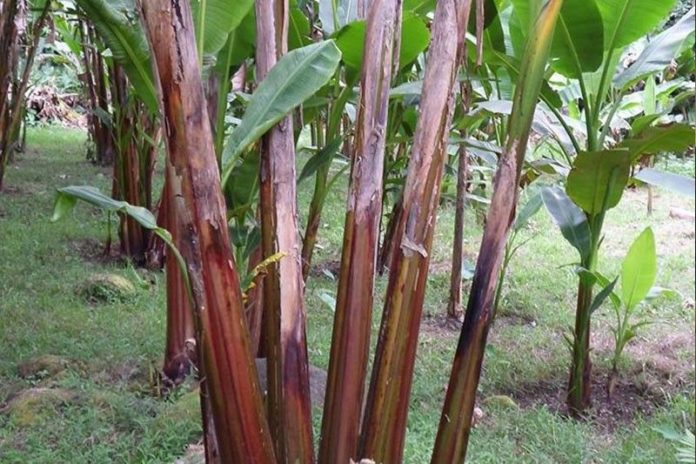 The abaca plant, scientifically known as Musa Textilis (Nee), innately grows in the Philippine soils particularly in the Bicol Region, the Visayas and Mindanao regions. This favorable soil and climatic  conditions made the Philippines as the top producer of abaca in the world.

Recently, however, the slew of typhoons led by Quinta, super howler Rolly (south), and Ulysses (north) disrupted this favorable conditions. Baras and Bato were the hardest municipalities (read: ground zero) by ST Rolly aside from Gigmoto, San Andres, San Miguel and Virac.

This unfavorable conditions due to climatic change is made worse by, for example, by the reported 90% abaca viral infestations in Barangay San Marcos, San Miguel, Catanduanes and Barangay Obi, Caramoran, Catanduanes to name a few.

In an exclusive interview last year by the Catanduanes Island Media Club with San Miguel Mayor Francisco  Camano Jr., he expressed his serious concern on abaca pests and diseases particularly abaca mosaic and abaca bunchy top. According to him, if left unchecked and /or uncontrolled, in 5-8 years said viral infestation would wipe out the abaca plantation in his municipality or the entire province in general.

Reports have it that PhilFida, Region 5 had submitted a rehabilitation program for abaca to the office of Governor Joseph C. Cua and TGP Partylist Rep. Jose J. Teves, Jr. who visited last Friday the other week.

He made mentioned of House Bill No. 6149 he filed declaring Catanduanes as the “Abaca Capital of the Philippines.”He also vowed to follow up the P121- M, allegedly increased to P129- M, as abaca rehabilitation fund promised by DA Secretary William Dar and Senator Christopher “Bong” Go who visited couple of weeks after ST Rolly devastated Catanduanes some in November last Year.

Amid his repeated concerns and questions on what things to be done vis-à-vis the abaca industry, the solon  called for the creation of a Technical Working Group (TWG) consisting of elected officials,  chiefs/heads/representatives from national, provincial and municipal offices.

Since we were not provided a copy of the Proposed Rehabilitation Plan prepared by Philfida, I am constrained to assume that it will continue its use of pesticides and insecticides that is not-environment-friendly. PhilFida’s alleged plan of providing fertilizers to abaca farmer drew drastic comments/flak from Mayor Francisco  Camano Jr. and TGP Party-list Teves Jr. who promised to seriously look into this matter upon his  return to Metro Manila the next day.

Due to time constraints and lack of jurisdiction as private entity, the proposed “FIRST PROVINCIAL ABACA SUMMIT” submitted to the office of Gov. Joseph C. Cua through Provincial Administrator and TGP Party-list Rep. Jose J. Teves, Jr. through his Chief of Staff, Mrs. Alma T. Villanueva, should serve as wake-up call to address the alleged abaca viral infestation that threatens to wipe out the abaca industry and the stakeholders depending on it particularly the lowly abaca farmers, abaca processors and traders.

Significantly, this is proactive move in view of the looming declaration of Catanduanes as the “Abaca Capital of the Philippines”, thanks in advance,  to the forward-looking perspective of TGP Party-List Rep. Jose J. Teves, Jr. (HB No. 6149) and Senator Cynthia A. Villar, Chaiperson, Senate Committee on Agriculture and Food (SB No. 1748).

Once approved in the not-so-distant future, these twin legislative-initiated  recognition would be challenged, imperiled, if not rendered futile, by the threatening infestation of pests and diseases such as abaca mosaic, abaca bunchy top etc., which if not controlled and/or eradicated would wipe out the abaca plantation in the  province in general.

HENCE, THE NEED FOR A NEW APPROACH IN COMBATTING SAID MENACE BESETTING THE ABACA INDUSTRY/PLANTATION IN OUR PROVINCE. THE ENVIRONMENT-FRIENDLY, ALL-IN-ONE BIOTECHNOLOGY DEVELOPED BY A SCIENTIST-INVENTOR/PLANT BREEDER/GENETICIST IN THE PERSON OF MR. DENNIS L. BIALIN (POPULARLY CALLED DOC GERMS) SHOULD BE GIVEN THE CHANCE TO BE INTRODUCED AND ADOPTED HERE IN THE PROVINCE OF CATANDUANES.

INITIALLY, BARRING ANY HINDRANCES, THE LOCAL GOVERNMENT UNIT OF SAN MIGUEL, CATANDUANES, UNDER THE STEWARDSHIP OF MAYOR FRANCISCO CAMANO JR., WILL ADOPT THIS BIOTECHNOLOGY WITH THE UTMOST SUPPORT OF THEIR SANGGUNIANG BAYAN MEMBERS HEADED BY VICE MAYOR ANGELITA A. TAULE.

As planned, a 3-day lecture and demo (practicum ) will be conducted and supervised by the scientist-inventor himself in a strategically situated abaca farm in the municipality to serve as “DEMO FARM.” Certainly, this  “ALL-IN-ONE-TECHNOLOGY’’ is applicable in banana and other plantations, the scientist-inventor said.

Interested neighboring ASEAN countries such as BAHRAIN, CAMBODIA AND INDONESIA, to name some, have invited him for speaking engagements vis-à-vis said biocontrol technology.

Who knows? In the near future, the Department of Agriculture (DA) under the stewardship of Sec. William Dar, where the PhilFida is an attached agency, may decide to adopt this biocontrol technology before it’s too late.

AS THE SOON-TO-BE-DECLARED “ABACA CAPITAL OF THE PHILIPPINES”, MUCH IS AT STAKE  INSOFAR AS THE PROVINCE, THE REGION, THE COUNTRY ARE CONCERNED.