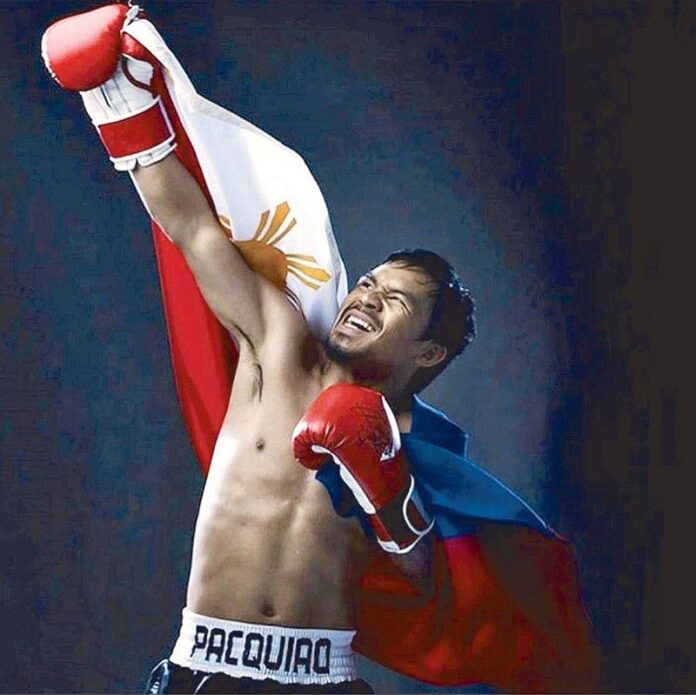 A new Pacquaio fight is just (at the time of publication) five weeks away, and naturally, the world is thrilled to see the “Fighting Senator” lace up his boxing gloves once more.

This particular fight, is special. Because this time, at the advanced age of 42, Pacquaio will not just be looking to become the unified Welterweight champion of the world, but also to further add a highlight to his already-illustrious career in boxing.

For the hard-core boxing fans, they already know who Pac-Man’s next foe is and the danger he poses to our “Pambansang Kamao” (lit. The National Fist). But to the so-called “casuals” the name “Errol Spence Jr.” is just another would-be victim of the invincible Manny Pacquiao – a boxer who has captured 8 world titles in the so-called glamour divisions of modern-day boxing.

Spence, is just another fighter who they can stalk on social media and whose fans would fall victim to endless reasons why the IBF and WBC champion, is no match for the Pac-Man.

For the hard-core fans, I will give this review and analysis for your pleasure. For the casuals, the goal is to shed more light on this boxer.

To save space (for obvious reasons) on this newspaper, we’re not going to talk about trivial information, like Spence’s birth, childhood and so on. Rather, this article will contain his achievements in boxing and his skills that led him to where he is now – a multi-belt welterweight champ avoided or, in the language of prize fighters and practitioners of the Sweet Science: “ducked” by other welters.

Let us begin with Spence’s skills. Physically, he has all the tools that can give Manny problems all night when they trade leather this August 21 (locally; 20 in western time zones). Spence is taller, standing at 5’9 – that’s 3 inches taller than the almost 5’6 Pacquiao. Spence also has a much longer reach, which he knows how to utilize. In his fight against  Mikey Garcia back who is physically as tall and big as Manny in 2019, we saw Garcia struggle to get within punching range because of Spence’s jab. He couldn’t go “head hunting” either because of Spence’s height. Now, at this point, we can argue that Spence isn’t the first Pac-Man foe who possessed such physical advantages. For example, Algieri and Margarito were both taller than Spence, and had decent jabs. The difference? Margarito and Algieri used their jabs to carefully set up punches or to desperately keep Pacquiao at bay whereas “The Truth”, as Spence likes to call himself, uses it similarly to Floyd Mayweather. He uses his jab as a measuring tool. He uses it to measure the distance where he can safely hit his foes but not get hit back in return. This technical gift, has often given Pacquaio problems, with examples from the Morales and Mayweather fights making it to the top of the list.

What if Pacquiao decides to play counter-puncher here? Does he have a shot? I mean, Manny is an underrated counter-puncher. But, in Spence’s defense – his first defense after a terrible car accident – Spence chose to fight, not a B-level fighter to serve as his tune up, but a seasoned and dangerous, heavy-handed counter-puncher – Danny “Swift” Garcia. In the fight, we saw Spence negate Garcia’s left hook and counters by using head movement and once again, his jab. But then again, some analysts argue, that Pacquiao is no Danny Garcia. We’ll see.

Okay, what if Pac-Man decides to go toe-to-toe – a set-up that often favors the warrior turned politician? I mean Pacquiao has a wonderful, no terrific inside game. As Max Kellerman said: “with Pacquiao, you think you have the advantage inside, then boom! he can put you on your butt just like that.” Ask Cotto, Diaz and Bradley who all tried their luck to dethrone Pacquiao in close quarters, they can all attest to the authenticity of this statement. But we’re not talking about those three, are we? Oh no, this is Spence we’re talking about.

Analysts have been left in awe with Spence’s inside game as well. No one could bully him inside, not even Shawn “Showtime” Porter who he fought last year. Porter then held the WBC version of the welterweight crown after he had outworked Danny Garcia. Porter has a same fighting style like Hatton and Horn – he was a swarmer, a boxer who would constantly pressure his opponents inside, or by pinning them to the ropes. In can be argued that, right now, he’s one of the best swarmers of this era. Although, as with all Porter foes, Spence struggled with this style, he still emerged victorious via split decision by playing Porter’s game. He used Porter’s style against him by giving back punches on the inside.

As all fight fans know, Manny can also box or be slick if he wants to, just not in the same flawless and elegant way as Mayweather, Canelo or Billy Joe Saunders. So, what if Pac boxes Spence? For this to work, Manny better hope that Spence does not know how to cut off the ring. But, unfortunately, he does. Spence earned his IBF strap by beating a mover in Kell “Special K” Brook. At first, “The Truth” struggled with Brook’s counter-punching and slick moves, but, in the end, Spence was able to corner the fighter from the UK and break his eye socket.

Aside from these, Spence is a terrific body puncher; he’s one of, if not the best in the world right now when it comes to this department. We can recall, that 3 out of Pacquaio’s 7 loses came via body shots. Manny has an excellent defense upstairs, but down there, is another story. Manny can block body punches but, because of his guard, his defense is best suited for shots to the head.

Basically, as fans say, Spence is no one-dimensional fighter. He can box, or brawl; he can make a fight look beautiful or ugly and he can use a fighter’s strengths against them or even negate them.

So there you have it fight fans. Those are the tools Pac-Man’s next opponent will bring almost a month from now. So what do you think, based on all of this, will Spence be another victim, or a conqueror?

To be fair, on my next article, I’m going to talk about Manny’s advantages going into this fight.

96.7 DWFB FM is your news, entertainment and music authority in Virac, Catanduanes. Serving every Catandungeño wherever you maybe, ON AIR and ONLINE.
Contact us: admin@bicolperyodiko.com
© 2007 Bicol Peryodiko | All Rights Reserved