LEGAZPI CITY – Some 15,426 families or 72,089 persons were evacuated in the provinces of Masbate, Albay, Sorsogon, Catanduanes, Camarines Sur, Camarines Norte, and Naga City on Saturday due to severe Tropical Storm Paeng.

Some 130 families (413 persons) are also staying in shelters outside the evacuation centers.

“A total of 2,426 individuals and 783 rolling cargoes are stranded in the ports due to the weather disturbance, and 685 persons, 7 buses, 160 trucks, and 51 light vehicles were stranded along Maharlika Highway going to Matnog Port,” Naz said.

OCD-Bicol recorded a total of 99 flooding incidents in Camarines Sur, Masbate, and Sorsogon.

Rain-induced landslides were also reported in San Jose, Presentation and Lupi towns in Camarines Sur, and Magallanes town in Sorsogon.

Damage to local infrastructure worth PHP1.4 million was reported in Caramoan, Camarines Sur.

Around 28 local roads, bridges, and spillways in Catanduanes, Camarines Sur, and Camarines Norte were reported as impassable due to flooding and overflowing.

The Department of Social Welfare and Development (DSWD) has provided PHP609,970 worth of assistance including 986 family food packs distributed to the evacuees in the provinces of Camarines Norte, Albay, and Catanduanes.

Meanwhile, TCWS No. 2 has been raised over Albay, Sorsogon, the northern and western portions of Masbate including Ticao and Burias Islands, the rest of Camarines Sur, and Catanduanes.

Severe Tropical Storm Paeng made landfall in Camarines Sur on Saturday after crossing the southern tip of Catanduanes.

In its 5 a.m. weather bulletin, the Philippine Atmospheric, Geophysical and Astronomical Services Administration (PAGASA) said the center of Paeng was estimated in the vicinity of Siruma, Camarines Sur, and was moving west-northwestward at 30 kph. (PNA/By Connie Calipay ) 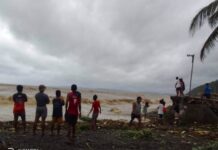 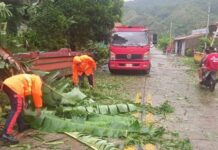