On the evening of His resurrection, Jesus appeared to His apostles who were gathered in a closed room to pray. He first greeted them with peace and commissioned them the way God the Father sent Him, to be missionaries of the good news of salvation to the whole world. Then He breathed on them, empowering them to fulfill their mission, and said: “Receive the Holy Spirit” (Jn 20:22c).

The first biblical passage that shows that God breathes on a creature is in Genesis 2:7b in which God formed Adam out of the clay and then breathed on him to give life. Breathing on the part of God on a certain creature thus means giving life or creation. God created Adam, the first man, by breathing on Him. Jesus recreates His apostles by breathing on them.

Jesus Christ founded the Church throughout His three-year ministry. All His teachings and deeds were intended for the salvation of men. But Jesus cannot continue His salvific acts by Himself after His ascension. For this reason, by calling some of His disciples and constituting them to be His apostles, Jesus founded the Church which would continue His deeds. The founding acts of Jesus Christ were comparable to God’s forming of Adam out of clay. There was still no life in Adam’s clay body until God breathed on him. In the same way, the Church was still lifeless until Jesus breathed on His apostles, thereby sending to them the Holy Spirit, the giver of life.

The Pentecost is thus the birth of the Church. By breathing on His apostles, Jesus did not simply put life to the Church; He also recreated His apostles, empowering them to be proclaimers of the good news of salvation. The Holy Spirit is not simply the life but also the power that capacitates the Church to be the sacramental instrument of God’s grace and salvation. It empowers the ministers of the Church to continue doing the works of Christ especially through the sacraments and preaching. It also empowers all the faithful in order to fulfill their vocation and live in accordance to the teachings of Jesus.

As we celebrate the Pentecost Sunday, we ask the Lord to breathe on us His Holy Spirit that we may be recreated and that we may be renewed and strengthened in our faith and commitment to our Catholic Church. With the Holy Spirit, we know that Christ continues to accompany us in our journey through Christian life and that we are then capable of living according to our dignity as children of God. 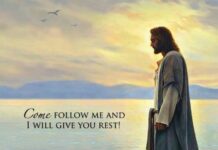 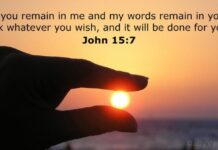 REMAIN IN ME AS I IN YOU! 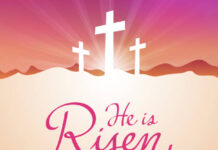 Go And Take The Lowest Place