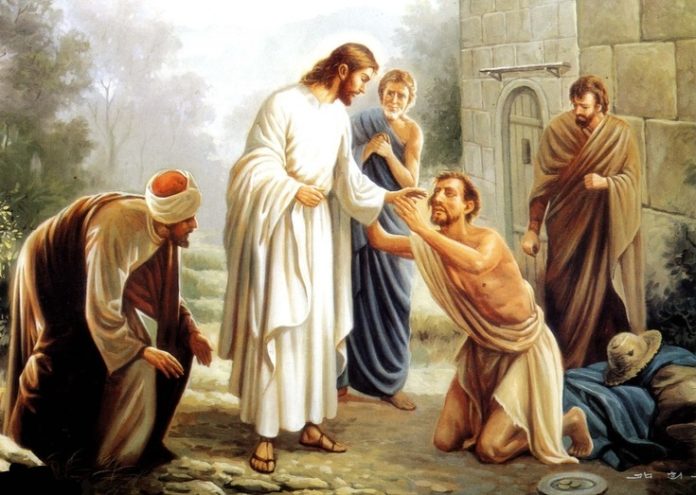 Jesus Christ was passing by when He saw a man born blind. He was asked by His disciples whose sin was the cause of the blindness of the man, whether it was his personal sin or the sin of his parents. Jesus replied that it was neither the sin of the man nor of his parents but rather it was so that the works of God may be made visible in him. The Jesus put clay with his saliva on the eyes of the man and said: “Go and wash in the Pool of Siloam” (Jn 9:7b).

The Jews believe that sin and sickness are essentially connected with each other so much so that if one is sick, it is because he has committed sin. The man was born blind and so he was afflicted with sin. But the question was: was the sin his personal sin or the sin of his parents? He was born blind and so he could have not committed the sin. If it was the sin of the parents, the parents should be the ones afflicted with sickness. Indeed, sickness and other physical evils happen in our present world because of the Original Sin and the sins in general. It was because of the Original Sin that physical evils have entered into the history of humanity. But it does not necessarily mean that when one is sick, one has committed sin. This is actually the moral lesson in the story of Job. Job was afflicted with illness even though he was not guilty of any offense against God.

In the Gospel, Jesus Christ did not show the connection between sin and sickness, thereby manifesting that there is no direct connection between sin and sickness. He rather said that such blindness was allowed by God to manifest the glory of God in that man born blind. According to William Barclay, “Affliction, sorrow, pain, disappointment, loss always are opportunities for displaying God’s grace.” Thus, God permits physical evil to happen because He wants to grant us a lot of graces. God is not the cause of physical evils that may happen into our lives. But He allows them in order to show His loving mercy towards us.

Then Jesus said to the man: “Go and wash”. The blind man went to the Pool of Siloam and washed himself. Then he returned able to see. The obedience of faith of the blind man led to the cure of his blindness. It was indeed a miracle since no blind person can be cured by simply washing himself in an ordinary pool. The miracle happened because the blind man obeyed the command of Jesus.

This Lenten season, Jesus commands us with the same words He said to the blind man: “Go and wash”. We are all blind because we have not seen the goodness of God and have betrayed His love by offending Him many times. We need to renew our lives through repentance and conversion especially by availing of the Sacrament of Confession. We must heed the words of Jesus and follow Him with the obedience of faith. Only when we believe that He can renew our lives and grant us a lot of graces and blessings can miracles happen into our lives. As we continue with this Lenten season, we ask the intercession of the Blessed Virgin Mother that we may go and repent sincerely and then wash ourselves with the sacrament of forgiveness so that we may return with new lives as children of God.

Go And Do Likewise

Blessed Are The Peacemakers

The Spirit Of The Lord Is On Me