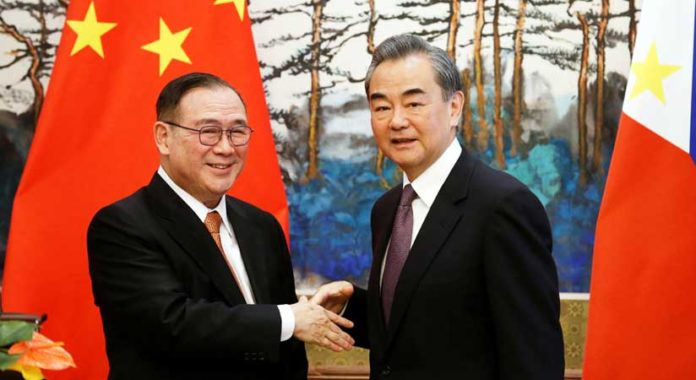 (After ranting and raving mad about the UNHRC resolution, Locsin now says the vote is a “small and harmless” matter.)

It is now patently obvious that Foreign Secretary Teodoro “Tweeterboy” Locsin, Jr. is a person with a very brave, sometimes filthy, mouth.

I will refrain from giving past instances to illustrate the bravery of his mouth.  I will just cite the latest.

After the UN Human Rights Council (UNHRC) adopted the resolution on the alleged violations of human rights by the Philippine Government in its war against illegal drugs spearheaded by Iceland, Tweeterboy menacingly warned “there will be consequences”.

One of those “consequences” could be severance of diplomatic relations with Iceland.  The other is withdrawal from the UNHRC.

After ranting and raving mad about the UNHRC resolution, Tweeterboy now says the vote is a “small and harmless” matter and that “we’re staying in UNHRC as a pedagogical duty to teach Europeans moral manners”.

Wow naman!  He thinks they’ll listen to us?  Malabo yata.

“I also notice that some senators did not read my response to the Iceland vote: that while I thought about withdrawing from the CHR, I decided to stay so as to teach it how to think morally and forthrightly without hypocrisy. This is a duty PH will not shirk. Also to bathe daily,” Tweeterboy said in a separate tweet.

Also to teach them to bathe daily?!  Including the women?!  Geeez!

“Any probe resulting from the narrow vote for Iceland resolution will not be allowed into the Philippines.  I have long wanted international cooperation on the drug war, eg. USDEA, Russia. Never from people who don’t shower at least once daily & likely on cartel payroll. Period… And that’s fucking final.”

Up to this writing, Locsin has not spelled out what “consequences” he had in mind, except to say that Iceland could “go to hell” and urge the public to “forget Iceland”.

Tweeterboy said earlier on that the Philippines should “follow America more” and withdraw from the UNHRC.  The US withdrew from the Council on account of its supposed unwarranted bias against Israel.

As for cutting off diplomatic ties with Iceland, Tweeterboy said:

“We’re NOT severing diplomatic relations with any country.  If we did, where’s the conversation?  How do you insult those who insulted us if you cut them off?”

Simple.  Just insult them.  You don’t have to have diplomatic relations with another country to insult it!  Elementary, my dear Watson, as Sherlock Holmes would say.

Tweeterboy also said it would be a “vacuous gesture” since we don’t have an embassy in each other’s capital.

It is obvious the fellow doesn’t appreciate the symbolic significance of such a move.

Apparently, Tweeterboy Locsin had no clearance from President Rodrigo Roa Duterte aka Digong on either the withdrawal from the UNHRC or severing ties with Iceland.

“Let us allow the President to give his final position on this,” presidential spokesman Salvador Panelo told reporters when asked about the possibility of the withdrawal from the UNHRC. “(He has the) final decision on this matter because he is the main architect of the foreign policy of our country.”

“Teddy Boy Locsin said no, he’s not cutting. As for me, I said I am seriously considering it. He is the spokesman but the Office of the President is the sole entity. That includes foreign affairs, because they are all Cabinet members,” Digong said.

(I hope certain senators, in particular Senate President Tito Sotto and Senator Panfilo Lacson, are taking note.  Locsin does NOT have the last say on foreign policy!)

At the same time, however, Digong expressed apprehension that cutting ties with Iceland might affect some 2,000 Filipinos working there.

I don’t think so.  Icelanders aren’t that stupid!  They may be racists but I hardly believe they will take it against our people working for them.  That would be like cutting their noses to spite their faces.  That would also make them look BAD in the eyes of the international community.

In any case, the paramount consideration for such a move is the greater good for the greater number of people.  Besides, other Europeans would only be too happy to employ those OFWs whom they may let go.

BUYING ARMS FROM THE US

Tweeterboy Locsin announced that we want to buy 74,000 M-16 assault rifles, with 3 clips each, from the US.

Given his propensity to make decisions apparently without prior clearance from the President, I am constrained to ask:  “Did he clear this one with Digong?”

With the prevailing general sentiment in the US towards the Duterte administration, based mainly on alleged human rights violations, Tweeterboy just might be disappointed.

It will be recalled that the US Congress stopped the sale of 27,000 such rifles to us when we needed them most during the Marawi siege.  Fortunately, China and Russia came to our rescue and donated the weapons we needed.

Too, Digong once said he will no longer buy military hardware from the US following that experience.

In fact, Defense Secretary Delfin Lorenzana said he will be visiting France, the Czech Republic, the United Kingdom, Spain and Portugal this September to window shop for military equipment.

This segment is intended to remind the Duterte administration of some of its yet unfulfilled promises and matters that need attention and/or follow-up action. More importantly, the people are entitled to know what’s being done about them.

1. Digong’s promise to rid the country of foreign troops. This, of course,
necessitates abrogating the MDT and the lopsided and constitutionally infirm VFA and the EDCA.

2. Reciprocal visa arrangements with the US and other countries.  What is Amboy Locsin doing about this?  Our embassy in Washington?  No less than President Digong has said he wanted this done about three years ago.  Has he changed his mind?  If not, Locsin should be directed to start things moving, or else…???

Today is the 85th day of the thirteenth year of the enforced disappearance of Jonas Burgos, son of the late press icon and founder of this newspaper, Joe Burgos.

After the acquittal of Major Harry Baliaga, Jr., the only person formally charged with Jonas’ kidnapping, I guess what happens next is now up to Divine Providence.

Q: Why did God create women?

A: He took one look at men and said, “I know I can do better than this.”