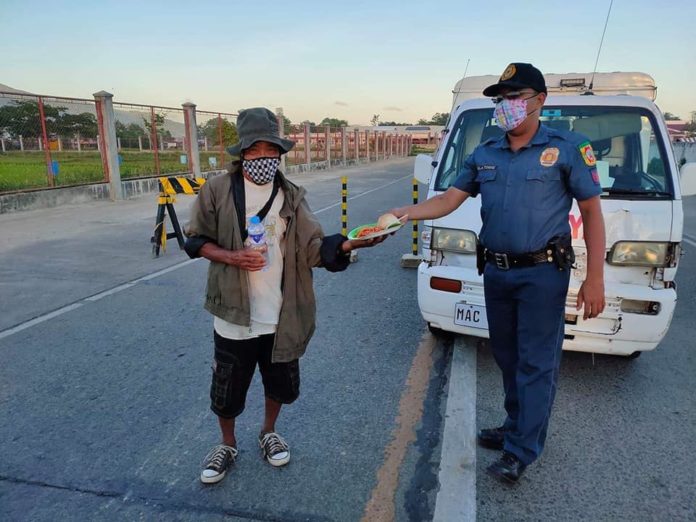 [Let us all try to be the Filipinos that we can be as exemplified by our OFWs when they are abroad – disciplined and law-abiding!]

Kudos and thanks to ALL the companies, groups, organizations and kind-hearted individuals for readily responding to President Rodrigo Roa Duterte aka Digong’s appeal to help in alleviating the hardships being suffered by the poor due to the lockdown of the entire Luzon to prevent the spread of COVID-19.

I refrain from mentioning names for fear that I might miss some of them.

Before I forget, thanks must also go the United States for its contribution of $2.7 million to help us in battling COVID-19.  I already mentioned in this space the assistance given by China and Russia last week.

On the other hand, I have yet to read or hear about some religious groups whose raison d’etre is to minister both spiritually and physically to the poor, the hungry and the sick, taking measures to assist the affected members of their respective flocks.

Prominent among them are the Catholic Church (the richest of the lot), Velarde’s El Shaddai, Quiboloy’s Kingdom of Jesus Christ and Villanueva’s Jesus is Lord.

I repeat, I have not read or heard of anything they are doing for those affected most by the COVID-19 pandemic.  If they are, they might wish to make it public.  That way, they may even attract more followers.

Above all, our gratitude and thanks go to the frontliners – medical personnel and staff of hospitals, health workers, government officials, soldiers and policemen for their sacrifice and heroism.  Mabuhay kayo!

Unfortunately, the worse is yet to come before the end of the current lockdown in Luzon in the middle of next month.

Till then, let us all try to be the Filipinos that we can be as exemplified by our OFWs when they are abroad – disciplined and law-abiding!

According to an Associated Press (AP) dispatch, there is a reported surge of white nationalism in the United States.

AP said the Southern Poverty Law Center in Montgomery, Alabama, claimed that the surge of white nationalism “has led to a growing threat of violence by factions that embrace bloodshed and advocate for a race war”.

The law center’s report comes on the heels of US President Donald Trump’s insistence on calling COVID-19 as the Chinese virus.  His Secretary of State Mike Pompeo calls it the Wuhan virus.

Although Trump insists that he doesn’t mean to cause anti-Chinese sentiment in the US, the effect of his statement is the rise of anti-Asian resentment among the white people in the US.

In the United Kingdom as well, the former colonial master of the US.  Unlike the Philippines, the US has since successfully reversed its status as a colony of the UK where the sun used to never set.

Already, there are reports both in the US and the UK of incidents involving whites berating Asians for COVID-19.  It is not far-fetched that such incidents could lead to violence.

In the UK, for instance, two Filipinos were reported to have been subjected to racial abuse.

ABS-CBN News reported that according to one Jim Leyesa, while waiting for his train at the Westminster tube station, a Briton sat next to him and “started swearing and moaning “– f—dumb ass, f—Asian people, bringing f—-n virus to this country”.

Fortunately, another person just persuaded him to move to another seat before the situation turned worse.

Another Filipino, Dia Villahermosa, 45, a nurse in Devon, England said that in 20 years, she has never experienced racial discrimination.  But after COVID-19, things became different.

In the US, Asian-Americans became the targets of “minor aggression to blatant attacks” from people blaming them for the pandemic”.

AP reported that in Brooklyn, New York, an Asian man in a subway car was yelled at and sprayed with an air freshener.

“In Los Angeles, a 16-year-old boy of Asian descent said other students had bullied him and accused him of carrying the virus,” AP said.

“Even before cities began shutting down all restaurants to stop the spread of the virus, Chinese restaurant owners were already experiencing steep declines in business because of racial stigma,” AP added.

Trump insists that calling COVID-19 Chinese virus “is not racist at all”.  He says he just wants to be accurate.

Whatever.  It still is irresponsible!  What his statement has done was to increase hate crimes in the US against Asian-Americans.

Eric Ward, director of the Western States Center, a group based in Portland, Oregon, that works to strengthen inclusion, said:

“We have an irresponsible president who continues to refer to COVID-19 as a Chinese virus.  That is intentional.  And at a time of great panic and fear, that will only lead to physical violence.”

“It is going to be critically important for community leaders, elected officials and others to step up their resistance to hate groups and their goal of dividing a united America,” he added.

Further, AP reported that CBS reporter Weijia Jiang tweeted that a White House official had called COVID-19 the “Kung-Flu” in front of her.  Without identifying the official, she mentioned the remark to Kellyanne Conway, counselor to Trump.

“Of course it’s wrong,” Conway reportedly said.  She called the reference “highly offensive” and said  that she was married to an Asian-American and that her children were 25% Filipino.

“Why don’t we go to the source and tell them that’s very hurtful and unhelpful,” she told Weijia.

The name of the official was never revealed.

Too, AP reported that John C. Yang, President and Executive Director of Asian-Americans Advancing Justice, said terms like “kung-flu” are not jokes.

“That’s racial stereotyping, and it’s just not funny,” he said. “This is not comedy when it leads to verbal and physical assaults against a community.”

So there… Let’s hope that US officials would be more discreet from now on.  Let us not forget that Filipinos are categorized in the US as Asian-Americans.  That makes our people living there even more vulnerable, as they already are, to hate crimes!

What is the Department of Foreign Affairs doing about securing a reciprocal visa arrangement with the US?

Early in his presidency, Digong said he wanted that done.  Unless he has changed his mind, which I doubt, the DFA ought to have started the ball rolling long ago.

Right now, the US charges Filipino tourist visa applicants $160 or a whopping P8,160 ($1 = P51) which is not refundable.  Americans pay nothing!  They should be charged a reasonable amount at least.  Is that a hard sell?

Needless to say, reciprocity should be the norm in visa arrangements with all other countries.