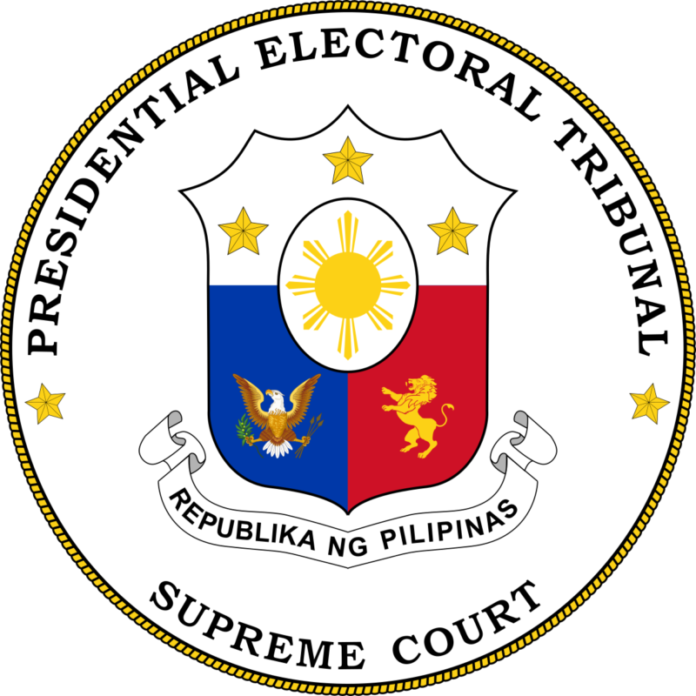 President Rodrigo “Digong” Duterte’s alleged trip to Singapore the weekend before last has again given rise to speculations about his health.

Consequently, the matter of presidential succession again became the subject of much discussion in many quarters notwithstanding what is clearly stated in the Constitution about it.

However, because of the unresolved protest against the “election” of Leni Robredo as Vice President more than four years ago filed by former senator Bongbong Marcos, those who voted for him naturally want the protest resolved first.

And, I believe, rightly so.  (Just to be clear, Marcos doesn’t know me from Adam.)

The big question is why hasn’t the Presidential Electoral Tribunal done so after four years?

Under Republic Act No. 1793 of 21 June 1957, the Tribunal shall be composed of the Chief Justice as chairman and ten other members of the Court.  However, the Tribunal’s composition was changed under Batas Pambansa Blg. 884 of 3 December 1985.

In any case, I think the composition of the Tribunal is irrelevant insofar as the question of why it has not made a decision thus far on the petition filed by Marcos against Robredo after almost four years.

RA 1793 states that the Tribunal “shall decide the contest within twenty months after it is filed”.

On the other hand, Batas Pambansa 884 specifies that the Tribunal “must decide the contest within twelve months after it is filed”.

I believe the Chief Justice, as the chairman of the Tribunal, owes the people an explanation as to why the Marcos petition is still up in the air.  After four years??!!

Isn’t that a form of dereliction of duty?

In the meantime, the Tribunal should also shed light on the information that members of the Tribunal receive a monthly allowance of P100,000 on top of their regular salary.

Could this be the reason, or one of the reasons, why the Tribunal has taken so long to resolve the issue?  Just asking…

PH NAVAL BASE IN FUGA ISLAND

Digong’s decision to convert a portion of Fuga Island located in the northern part of our archipelago to a naval base couldn’t have been more timely.  Lately, there have been reports that both China and the US are salivating to get a foothold on the island for strategic reasons.

A Philippine naval base on the island would certainly prevent either one of the two powers from carrying out their alleged intention.

PASSPORTS TO HAVE PH MAP?

There is a bill in the House of Representatives that would mandate the printing of the country’s map – including the West Philippine Sea and Sabah – on passports.

Once approved and implemented, I would not be surprised if Filipino travelers  were to encounter difficulties, if not outright denial, in entering China and Malaysia.

It will be recalled that China also printed on its passports its map that includes its so-called nine-dash-line claim in the South China Sea.  The Chinese move was widely condemned by claimants of certain areas in the South China Sea, including the Philippines.  (I must confess I have no idea if China has removed or retained the map on its passports.)

In any case, I think the House would be well-advised if it were to conduct appropriate consultations with relevant agencies like the DFA and DOLE on the bill.

One of the more undesirable traits of the Filipino is his tendency to forget important matters that are no longer in the news.  Below are items that the authorities concerned should be reminded of:

In June last year, President Digong directed the Department of Information and Communications Technology (DICT) under then secretary Eliseo Rio, Jr. to search for a replacement for poll technology provider Smartmatic.

Earlier, Digong also advised the Commission on Elections (COMELEC) to stop its partnership with Smartmatic over allegations of election cheating and fraud.

Nothing has been heard from DICT or COMELEC since.

What, if any, is DICT Secretary Gregorio Honasan doing to carry out Digong’s instruction?

And Comelec Chairman Sheriff M. Abbas… what steps has he taken to replace Smartmatic?

I hope Digong has not changed his mind about getting rid of Smartmatic.

In November last year, Senate President Vicente Sotto III urged the National Bureau of Investigation (NBI) to serve the arrest warrant issued by the Senate on Bautista for contempt for ignoring the Senate hearings into his alleged ill-gotten wealth.  It was his wife who blew the whistle on him.

Bautista was earlier impeached by the House of Representatives but resigned and left the country before standing trial in the Senate.  It was later found out that he had fled to the US.

Is the government doing anything about seeking his extradition from the US to face the charges against him?  Isn’t flight a sign of guilt?  Maybe his passport should be cancelled to force his return?

American:  Stealing is against the law.  You will be jailed.

British:  Foreigners who are caught stealing are deported.

Saudi Arabian:  Do not steal or your hand will be cut off.

Japanese:  Stealing is dishonor to family.  We commit hara-kiri.

Filipino:  Stealing is FOR OFFICIAL USE ONLY!