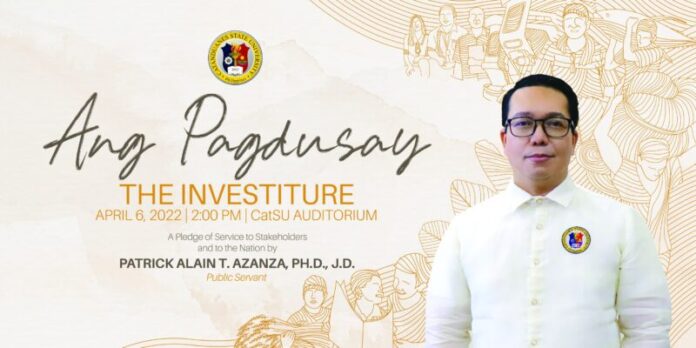 This early, the rank and file of the Catanduanes State University (CatSU) are in the thick of preparations for the incoming AACCUP evaluation and other academic concerns.

Significantly, after the Lenten season observance, there will be a convergence of all academicians—administrators, faculty members, CHED bigwigs and   invited guests to CatSU, officially known as Green University during the stewardship of then CatSU SUC President III DR. MINERVA I. MORALES.

On April 6, 2022, roads so to speak, lead to the Catanduanes State University (CatSU) campus for historic moment.  On that rendezvous with history, DR. PATRICK ALAIN T. AZANZA, would be installed as the 7th CatSU SUC President III after less than one year of being installed as the TOP HONCHO of the premier CHED-run University in the Happy Island province.

I described DR. PATRICK ALAIN T. AZANZA AS TOP HONCHO in that he wears two hats—as the highest academic official & IT-oriented leader-manager rolled into one.  A world-class administrator, he brings with him, during the investiture, the distinction as the first among the TOP 12 MOST INFLUENTIAL PERSONS IN THE HAPPY ISLAND in 2021.

As Vice President for External Affairs of the SEGURADO KA SA CATSU RETIREES ORGANIZATION, INC., I wish you the best of luck, pink of health, safety, and Solomonic wisdom continuity in your first 4-year term as president.

In his message after the ribbon-cutting ceremony, President Patrick Alain T. Azanza  stressed the importance of art in everyone’s life. He said that “without the arts, life is meaningless.

Life would not be more beautiful without life expressed by the artists through their works.”

He likewise wished that one of the kinetic stainless-steel sculptures of featured artist Dr. Jualim Vela could be made bigger and made a centrepiece of the students’ park now being built nearby. Dr. Azanza recognized the talent to make art from Catanduanes well-known not only in rest of the nation but also internally. He added that each piece of visual art in the exhibit showcase the Catanduanganon’s resiliency and inner self.

Aside from Dr. Vela, other artists featured in the exhibit were works of established Maruja Panti, Noel Villanueva, Rene Samar and Jai Marqquez.

The other community newspaper’s long-time poet Efren T. Azor (ETASOR), hold your breath, had his painting of Maria Cristina Falls (mid60s) had its own spot.

Congrats to VP Ramon Feliope Sarmiento and his team with the participation of established and emerging Catanduanganon artists. Surely, this arts exhibits would be yearly event in the University in the New Normal.

Earlier, LGU-Virac through the Tourism Office marked the celebration of National Arts Months by holding Sining Pandemya on February 14-19, 2022  at the 2nd floor of Virac Center Mall.

The event was conducted in support of the Arts Month aimed to conserve, promote and popularize Filipino artistic creations. Said six-day activity was spearheaded by Municipal Tourism Officer-Designate Mariel Tabuzo-Torzar, in collaboration with with Virac Center Center Mall and Renzo Art Gallery and Frames.

Featured were different local from various fields including visual arts, performance arts, literature, music and handicrafts and helped in the spotlights their works, talents and achievements, as well as highlight their unique crafts.

Truly, an artistic, entertaining treat to Catanduanganons in this hard and trying times amid the threat and devastation wrought by Covid-19 pandemic. (AUTHOR: BUDDY ISORENA)