Alistair Honeybun’s contribution to the “Laugh it’s the best medicine” department of the Reader’s Digest, April 2011 issue, page 146., drew my attention due to its featured laughter story seriously entitled: “Lunches Can Be Lethal.” The featured material, which eventually inspired me to write today’s column with a question mark, goes on like this:

“Three construction workers on the 20th floor of a building stopped work one day for lunch. The first guy opened his lunchbox and groaned, “Not corned beef again. If I get a corned beef sandwich one more time, I’m going to jump off this building.

“The second man looked at his sandwich and said, “What are you complaining about? I’ve had cheese sandwiches for 15 years. If I see one more, I’m going to throw myself off the building as well.

“The third guy, who is blond, opened his lunchbox and said, “Oh no, not salami. If I get salami one more time, I’m going to jump, too”.

At the funeral, the first man’s wife was weeping. She said, “If I had known how really sick of corned beef he was, I would have never given it to him again”.

The second man’s wife, through her tears, said, “I could have given him something else. I didn’t realize he hated cheese so much”.

Everyone turned and stared at the blond guy’s wife. “Don’t look at me”, she said, “he made his own lunch.”

Moral lesson: “The success or failure of a man, emotionally or physically, depends on her /or through his stomach. The wife should not forget the needs and wants of his husband. Oftentimes, if possible, have a variety of nutritious lunch meals to choose from. This will avoid complaint, distaste, and whining on the construction workers who need more energy to perform and withstand the hard work it demands. The rub, however, boils down to financial constraints. One cannot give what he/she does not have.” 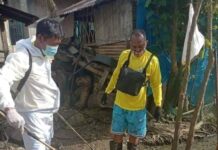 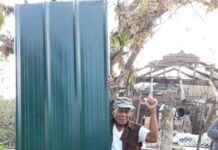